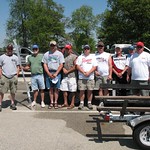 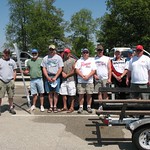 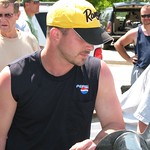 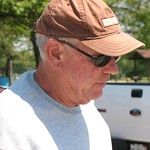 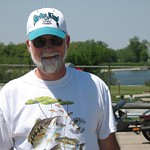 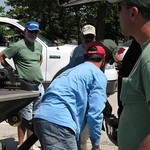 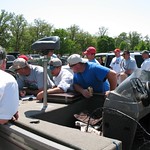 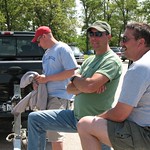 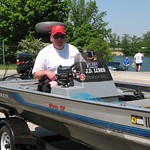 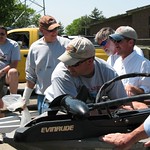 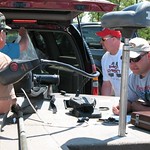 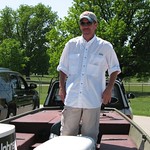 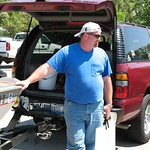 After cancellation of the April 14 event due to dangerous weather conditions, the 2007 Strike King Ever-Bloom Tournament Trail kicked off a new season at Lake Bloomington on May 12th and right on cue a blustery cold front rolled through the area the night before. Twenty two teams launched at 6:00 am with temperatures in the low 50's and blustery wind conditions with water temperatures holding steady in the lower 70 degree range in hopes of solving the lake's mysteries. Jamie Maisenbacher and Guido Didonato found a small key to the frontal conditions that allowed them to bring 3 keeper fish to the scales. They weighed 8.78 pounds which captured the title to this event. Second place went to the team of Pat Welch and Brian McDaniel with 2 fish of 5.23 pounds, good enough for the $330 prize. Third place finishers Jack and A.J. Menssen and fourth place finishers Junior Nottencamper and Kourtney Funk each weighed in 2 fish, which ended the multiple fish bags. Jack and A.J. took home $110 and Junior and Kourtney wont the two Setyr rods. Finishing firth and taking Big Bass honors were Dusty Whitacre and Brian Estes. This team boated a 3.65 pound largemouth which takes the lead in the Viscious Big Bass of the Year award, and their fifth place showing netted them the Strike King top to Bottom Bags. A special thanks goes to Jerry Maroglio and the Bloomington/Normal Bass Club for the use of the scales. The next event is May 26th on Lake Evergreen, which I guarantee will produce many more and larger green guys. Please prepay for this event at Terry's office to insure a field that is full or close to it.