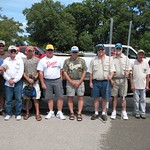 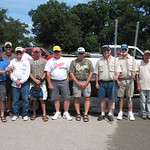 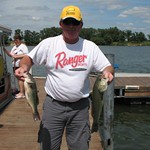 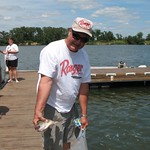 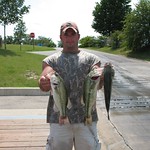 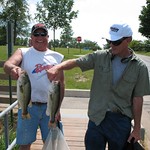 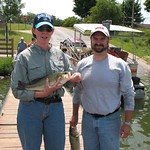 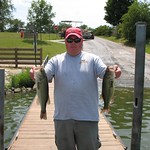 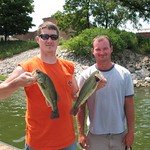 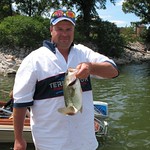 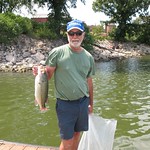 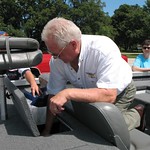 Stalwart father and son team Jack and Jim Menssen won Saturday's Strike King EverBloom Tournament on Lake Bloomington. Their winning weight was 10.46 lbs and they were the only team to bring a limit to the scales. They were fishing red shad plastic baits and Jim mentioned " I have never seen bass so consistent on one color. They wanted red shad and we gave them red shad. They keyed on that color." In second place with 3 bass weighing 9.31 lbs were veteran anglers Rick McMahan and Matt Rice. They also had big bass of the tournament with a 3.99 lber. Great job guys! Third place also went to a father and son team. Roger and Rodney Hagar had 3 bass that weighed 7.17 lbs and won two Setyr Rods for their efforts. Steady pro's Larry Russell and Randy Ferguson finished 4th with three bass at 5.88 lbs. They borrowed a boat to fish the event and you can bet they will be borrowing it more often now. Rounding out the top 5 and winners of the Strike King Top to Bottom tackle bags were scribe Dusty Whitacre and Bryan Estes. They too had 3 bass and they weighed 5.55 lbs. There were 36 bass weighed in weighing 81.03 lbs for a 2.25 lb average. The Heavyweight of the Year leaders are Terry Brown and Mike Blake with 40.37 lbs. Jack and Jim Menssen are second with 35.09 lbs. Guido Didanato and Jamie Maisenbacher are in third with 29.90 lbs and Greg Bayles and Dave Norris are 4th with 29.90. Larry Russell and Randy Ferguson are in fifth with 26.90 lbs respectively. The winners of the Heavyweight of the Year gets to fish the BassFan Army Weekend Warrior Championship in the spring of 2008. Our next event is on Evergreen Lake August 25. Please pre-pay at Terry's office before the event.