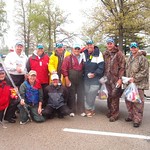 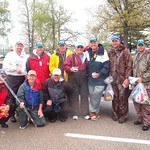 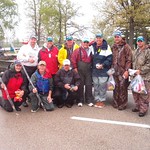 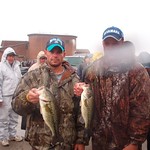 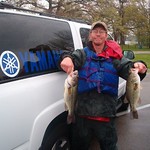 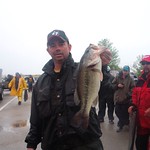 We have had some miserable weather before for openers but this years kick-off ranked right up there with some of the worst. Twenty four teams were met with temps in the upper 50's and brisk southeast winds of over 25 mph. Larry Russell and Randy Ferguson blew away the rest of the pack with 9.37 lbs. They caught their fish flipping and pitching in Money Creek and got $624.00 for the win. They are now leading the Terminator Heavy Weight of the Year. In second place was Jerry Martoglio and Loren Peters with two fish weighing a respectable 6.45 in Money Creek as well. They caught them on Strike King spinnerbaits and unnamed tube. They cashed a check for $336.00. They also had a big bass of 4.08. Dave Norris and Greg Bayles finished third with 6.09 lbs. They fished all over the lake and fished grubs and crankbaits. They received the first out of the money award of two Setyr Rods. The Strike King top to bottom package went to Brian Estes and Dusty Whitaker for 4th place. Freddie Myers and Ken Peterson are leading the Mossy Oak Big Bass of the year of 4.09 lbs. A total of 16 fish were caught and a total weight of 46.31 lbs. We had one dead fish. The next event is May 13. Please get there by 5:30 am for draw.