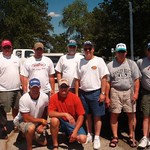 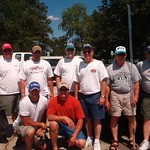 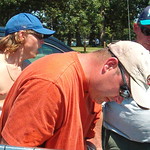 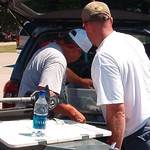 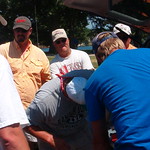 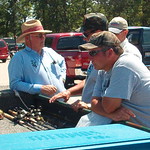 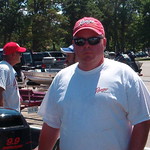 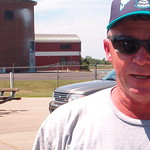 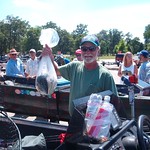 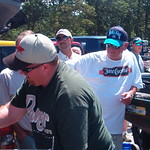 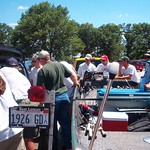 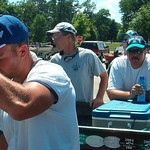 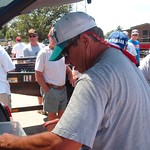 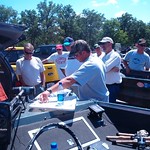 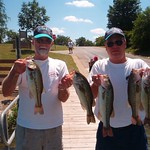 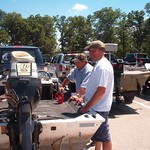 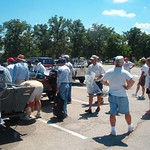 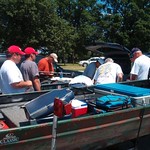 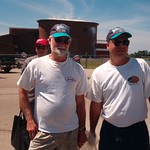 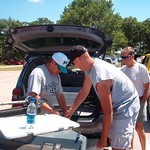 A cool morning with bluebird skies welcomed anglers to the fith stop on the Strike King Ever-Bloom Tournament Trail on Lake Bloomington. Many of the tournament fishermen donned windshirts and jackets at the 6:00 am takoff, but the early fishing was anything but cold. Twenty two teams brought 51 fish to the scales that totaled 117.63 pounds. Talk around the scales revealed that a vast percentage of the green guys were caught before the air temperature warmed to the low 80's. True to this comment were winning anglers Richard (call me Dusty) Whitacre and Bryan Estes. This fomidable team captured a limit of 5 fish before 10:00 am that weighed 14.43 pounds, good for the $572 first prize. Their stringer included an anchor bass of 3.56 pounds. They told this writer that the bulk of their fishing was deep water with Carolina rigged plastic baits plus jig and chunk. According to Dusty, they fished points, but it was obvious that one long point dominated their time on the water. Venerable anglers Roger Hagar and Rodney Hagar finished second. The limit of fish they bagged weighed 12.20 pounds that netted a check of $308.00. This team was close mouthed about technique, but they were seen at many of the seawalls bordering the water. Third place Setyr rods went to Larry Russell and Randy Ferguson with three fish totaling 8.81 pounds. A big thanks to Larry Russell for helping out with the weigh-in! Rounding out the top four were Jamie Maisenbacher and Guido Didinato who also weighed three fish that weighed 8.32 pounds, which included the day's largest bass at 4.45 pounds. They took home the Strike King Top to Bottom bags and $220.00 for Bg Bass honors plus 'Mossy Oak' Classic fishing line. Pre tournament talk centered around the poor results that Lake Bloomington has exhibited in previous weeks tourneys, but Saturday showed that this lake will still give up plenty of keeper fish. On a side note, Junior Nottenkamper (a transplanted Florida tourney angler) successfully caught his first smallie of his career. This 17 inch bronzeback was one of the first brought to the scales this year. The next event is scheduled for July 23rd on Lake Evergreen. Again, please contact Terry Brown or Mike Blake to let us know your plans for participation. As always, please remember our sponsors when you purchase gear or tackle because without them this trail wouldn't be as great.